Rose-Lovell, a gracious 1907 historic home in St.Marys, GA, is available for rent by the week or  month.. With five bedrooms, three full bathrooms, a formal dining room and comfortable living room, the home is a great place for a family and/or friends get-away or for a small corporate meeting.  Even though the home has been thoroughly modernized (central heating and air conditioning, modern kitchen, and more), one can still appreciate the original details of hardwood floors, large windows, dramatically high ceilings and two porches…all surrounded by a half acre of camellias, azaleas, roses, magnolia, oak, camphor, cedar and persimmon trees, scuppernong grapes and a variety of other lush plantings. St Marys Magazine described the Rose-Lovell House:   “There is something ineffably serene about this house. It is a visual version of a Vivaldi Concerto or Handel’s Water Music. I sit and absorb the soothing impact of pale walls against honeyed woodwork, the abundance of flowing space and the unusual sense of tranquility that one feels here. My eye delights in the detail of the solid mantel-pieces that rest above the eight fireplaces, the perfectly chosen artwork that is redolent of a long-ago, somehow simpler, time and the light…always the glorious abundance of light that fills the house.”

D.P and Leah Rose purchased the land for the Rose-Lovell house in November of 1907 from Johnson and Murphy. (Lemuel Johnson was the founder of the St. Marys Railroad.) D.P. Rose was a lawyer, businessman and influential state senator who constructed his new home using an innovative brick-casting procedure.  The June 19, 1905 issue of the Atlanta newspaper described the innovative technology:

“First Industry of St. George (Georgia).” “The St. George Imitation Stone Works are now ready for work. A force of hands completed the building Saturday. Senator Rose and Mr. H. H. Ford of Fitzgerald are the principal owners and it is their intention to furnish stone, sand and brick for the several buildings under construction. The machinery is en route and its arrival will start this place’s first industry.” At least one piece of that machinery is thought to be block making machine (shown) used in the construction of the Rose-Lovell house.  They probably had to go all the way up river to St. George before the St Marys River yielded sand from fresh instead of salt water needed in casting the block. 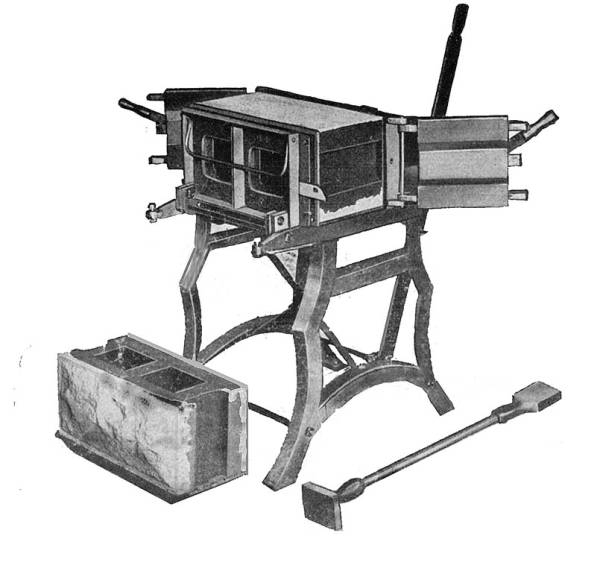 The house was completed by 1909 and was the Rose home for twenty years. Dr. G.R. and Mrs. B.W. Thigpen purchased the house in 1929. The Thigpens were active in the St. Marys community for 20 years. Dr Thigpen was not only the local doctor but served as Health Officer, County Coroner, County Convict Physician and Alderman. He brought the first automobile in St Marys, a 1911 Maxwell. Dr. Thigpen’s health declined in the late 30’s and he passed away in 1941. Mrs. Thigpen continued to live in the house and be active in the community. She was noted for her gardens. She designed and laid out a formal garden with a gold fish pond in what used to be the lower, west part of the property. She also had a kumquat tree by the kitchen door, scuppernong arbors, pecan trees, various fruit trees and a vegetable garden. Mrs. Thigpen sold the house to Rufus and Mildred Lovell in 1956. Rufus was a Shrimper and Mildred continued growing a variety of fruits and vegetables which she canned and preserved. Later the Lovell’s divided the upstairs into apartments and rented the apartment above the garage. Ms. Genevieve Silvear purchased the house in December 1994. Genevieve returned the house to a single family dwelling and carried out major renovation. She added central heat and air, updated the plumbing and electrical systems, renovated the kitchen and added a new metal roof. Tongue-and- groove ceilings, window panes, wood moldings, and pine flooring are some of the original appointments. Greg and Sue Lockhart purchased the property in March of 2001. They continued renovations with painting and floor refinishing. The Barrie Family purchased The Rose-Lovell House  in late 2005 with the vision of creating a private spot for family and friends’ gatherings. It is available for daily, weekly, monthly and special events rental. See www.RoseLovell.com for more information. The house holds some of the Barrie Family’s special furnishings and heirlooms.

The picture that now hangs above the fireplace in the living room is “Butch.”  Walter Jennings, who was a cofounder of Standard Oil, commissioned this painting of his dog. Robert Barrie, paternal grandfather of the owners, worked at the Jennings’ estate in Cold Spring Harbor, Long Island and so loved the dog that Mr. Jennings gave him the painting. The Jennings’ estate was named Burrwood out of Mr. Jennings’ respect for Aaron Burr. In an interesting coincidence,  Aaron Burr fled to St Marys after killing Alexander Hamilton in a duel in 1804.

The pen and ink sketches in the 1st floor hall are some of the many drawn by Clarence Sanders, maternal grandfather of the owners.

The Spanish style sideboard in the dining room was rescued and refurbished in the 1950s by Carol Barrie, the owners’ mother.  She found it, loaded with paint cans and missing a leg, in basement of the Robidoux Hotel in St Joseph, Missouri. 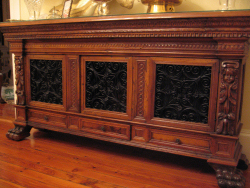